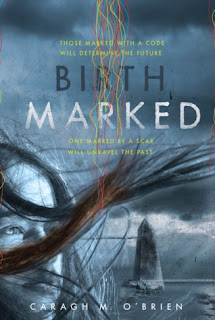 Hundreds of years from now, Lake Superior is a dried wasteland renamed "Unlake Superior." The bountiful North America that we now know has been replaced by a barren, hostile world. Inside the walled-off enclave the wealthy live in relative luxury, on the outskirts of the Wall the poor scrape by. Only, the children of the poor have a chance at being accepted into this world of privilege. The first three babies born every month are "advanced" from their birth parents and will be adopted by the rich families inside the Enclave.

Sixteen year-old Gaia Stone is training to become a midwife. She is horribly scarred from an accident that happened when she was just a toddler. Her horrendous facial scars make her bashful in most situations, but not when she's attending a birth. Her mother is a master midwife and has shown Gaia all that she knows, including the process of tattooing a "birthmark" on a newborn before it's handed over to the guards at the wall.

When Gaia's mother and father are taken by force one night, she decides to enter the Enclave illegally. Once she does, she meets a whole host of people who are willing to risk their lives to rebel against the sick system that has robbed the people outside the wall of their children for hundreds of years and that has kept the gene pool inside the wall riddled with diseases, weak DNA, and infertility.

This is a thought-provoking exploration of a futuristic world where no parent has the right to their children and where the rich are pitted against the poor in a strict caste system. Gaia and many of the other women in this story are depicted as strong and intelligent. True heroines--an encouraging trend that will hopefully continue in YA lit.

There are some aspects of this book that don't always add up, but on the whole this series is rich, fresh, and exciting. I read that there are two more books planned for future release. I can't wait to read the next book in this series and find out what happens to Gaia and the rest of the rebels of this dystopian world!

**Read as part of the YAD2 Reading Challenge from Bart's Bookshelf**
Posted by Mrs. DeRaps