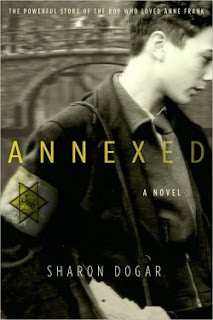 Every school year, I teach Elie Wiesel's memoir Night. Every year, it's difficult to read about his horrific experiences as a Jew living in Hilter's Europe. It's not a pleasant experience, but I keep teaching this book because of the affect it has on my students. They are almost always moved and inspired. It is with this in mind that I have decided to create a stockpile of Holocaust and WWI-era YA lit in my classroom. One of the books I purchased with my budget this year is Sharon Dogar's Annexed.

Annexed is the fictional account of Peter van Pels's experience of hiding from the Nazis with Anne Franks and their families. For two years, he and his mother and father, Anne with her mother, father, and sister, and a Jewish doctor lived in a cramped attic above Otto Frank's warehouse. Even though they took all precautions available to them, they were found out and sent to concentration camps. Of the eight hideaways, only Otto Frank, Anne's father, survived.

Anne Frank's diary survived the war, so her voice is the one that colors our understandings of what it was like to spend two years locked in an attic while fearing for your life, your family, and the hundreds of people you used to know. Annexed adds Peter's unique perspective to this mix, and goes beyond the time that Anne's voice stops. He takes us on the train after the group is caught, into the concentration camp, and on the death march that killed him.

This colorful imagining of historical events has some upset, but I find it fascinating. I know that it is painful for me to revisit Wiesel's story every year with my sophomores. I cannot imagine the strength and courage that it took to write this novel. While Dogar's imaginings may be completely off-base from the actual thoughts, feelings, and experiences of Peter van Pels, it is important to allow authors to create voices for those who are voiceless. I cannot imagine that Peter would have been angry that an author in the 21st century cared enough about his life to write a book that would go on to raise awareness about the Holocaust.

This book, and other historical fictions that have yet to be written, are inspirational and cautionary all at the same time. Our new and future generations of readers and activists need voices like Peter's to urge them to action so that the horrors that were every day in the 1930's and 40's never happen again.


*  *  *
To all veterans, past and present: Thank you for your service and your commitment to protecting our country and the people of the world. You are the true unsung heroes of our nation.
Posted by Mrs. DeRaps