Jami at the YA Addict is hosting a mini challenge for the Halloween Read-A-Thon. For this challenge, participants are asked to post about their "spookiest" read.  I haven't read a lot of books that have spooked me, but there is one that I read recently that has me wondering and thinking. And, it's kinda spooky.

It's called Trance and it's by Linda Gerber. Here's my synopsis: 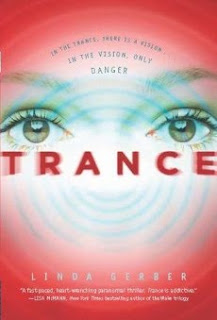 Ashlyn and her sister, Kyra, have an ability that no one else seems to have. Every once in a while (could be once per day or once per month), they have visions. While they are having a vision, they go into a deep trance. In their trance, they see events that have yet to happen. And when they awake, they see that they have written lots and lots of equations.

Though Kyra and Ashlyn have the same ability, they do not have the same reaction to their trances. Kyra saw visions that led her to believe that something bad was going to happen to their mother. Ashlyn chose to silence her trances with alcohol. Then, their mother died in a tragic accident--an accident that Ashlyn caused.

Now, Kyra is gone. Ashlyn does not know where. Worse, her father has completely immersed himself in his work and pays little attention to Ashlyn. She feels totally and completely alone. And the visions are still coming. But, this time she plans to solve the mysterious clues and help to save a life rather than take one.