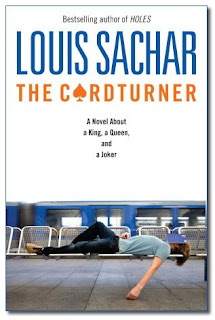 One day last week, I picked up my copy of Louis Sachar's The Cardturner. I sat at my picnic table and opened the book. A few hours later (and with a bit of a sunburn), I closed the book. It was time well-spent.

As the title suggests, this book is about a person who literally turns cards. His name is Alton Richards, and he's seventeen years old. How does one become a cardturner? Well, Alton is called to help his great uncle, a rich elderly man from whom Alton's parents hope to inherit lots of money. Alton's been groomed to please his "favorite uncle" (as coached by mommy dearest) ever since he can remember. Now blind, Alton's uncle Trapp cannot play his beloved bridge game on his own. He needs Alton.

Who would think that a book about bridge, a crazy complex card game, would be a page-turner? Even more cool is the fact that Sachar included lots of lengthy explanations about the game in the story, but you could skip them if you want. Whenever a long bridge lesson is about to begin, Sachar inserts a Moby Dick whale graphic, and you can choose to either read it or skip it and find short version in a little box following the long version. Sometimes I read them, other times I skipped. I understood the story no matter which route I chose.

I don't want to reveal any spoilers, but I'm sure you can guess that Alton ends up growing closer to his uncle than he ever thought possible. In the process, Alton learns more about himself and grows as a person. I loved this coming-of-age story, and think that fans of bridge (wherever you are) and non-fans (probably lots of these among the under sixty set) will enjoy this story. Who knows? Maybe bridge is the new Texas Holdum.  Maybe not. But, this book is a sure bet.
Posted by Mrs. DeRaps