This Book 2 Book review is inspired by Jane Eagland's Wildthorn. I received an ARC of this title as part of the Book It Forward ARC tour for this novel. Interested in signing up for an ARC tour? I highly recommend this site!

What is this feature? Book 2 Book is an idea that I had based on some conversations with fellow educators. Most English teachers that I've talked to do not participate in the YA blogging world (and I'm fairly new to it myself). Because they are not as interested or well-versed in this world as some of the bloggers I've met in my travels around the blogosphere, they might not know about the abundance of great YA available. And, so much YA can be used in the classroom.

* * *
As I was reading Wildthorn, which I basically devoured in a few short hours because I could not put it down, I could not help but think of several titles that would pair nicely with this one. So, I am going to choose a few of the titles that came to mind and talk about how each relates to the other.

Pair Number One: Wildthorn and "The Yellow Wallpaper" 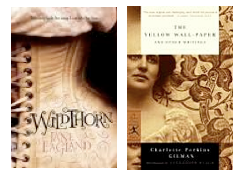 One of the short stories that stands out in my mind as sickeningly sad and real is Charlotte Perkins Gilman's "The Yellow Wallpaper".  In this short story, a woman suffering from "depression" is locked in one of the rooms of her house by her husband, a doctor. At first, she battles against her confinement, but slowly starts to accept it and no longer wants to leave the room. The reader is not sure as to whether she was actually psychotic upon entering her room, or whether the isolation causes her psychotic breakdown. By the end of the story, the woman is completely unstable and has entered the yellow wallpaper that covers the wall of her small space.
Wilthorn is about a young girl named Louisa who in tricked into and involuntary admittance in a mental institution. She is admitted to this insane asylum, named Wildthorn, for pursuing her dreams of becoming a doctor and for not conforming to the role set forth for her by Victorian society. Though she has her wits about her when she enters, there are definite lapses in her mental state the longer she is imprisoned in this "hospital".
Both stories are set in Victorian times, though Wildthorn takes place in England and the short story is set in New England. This could be an interesting point for comparison, and could help to create a larger sense of how women were treated in the 19th century by medical professionals and their families.
Pair Number Two: Wildthorn and Girl, Interrupted 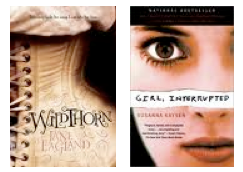 Even more interesting than the main character's story is the interactions she has with other patients in the mental institution. This aspect, and Louisa's attempts at breaking free, reminded of Girl, Interrupted by Susanna Kaysen. Though the time periods are significantly different, there are some concurrent themes, like sexual abuse of minors, abhorrent medical treatments, and the relationships of the patients and patient/ nurse friendships.
Though Louisa is alone when she enters Wildthorn, there are two friendships that help her to continue to feel like a human and that keep her hoping that she will one day break free of the institution. Eliza is employed on the ward as a sort of low-level nurse. She and Louisa strike up a friendship (and a bit of a romance follows). Also, Louisa befriends an unfortunate girl named Beatrice. These relationships reminded me of those that Kaysen portrays in her book, which is set in America in the 1960's.
It would be interesting to think about the comarisons and contrasts of mental health care in the late 1800's versus the mid 1900's. Unfortunately, one might find quite a few commonalities.
Pair Number Three: Wildthorn and One Flew Over the Cuckoo's Nest 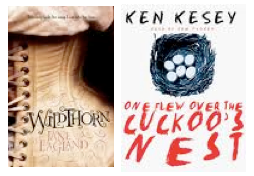 Ken Kesey's One Flew Over the Cuckoo's Nest is one of the best books I've ever read. I know that I say this about a lot of books, but this is one of my all-time favorites. It really goes deep into American society and the expectations for "normal" American males living in the 1950's. Certainly, there are a ton of comparisons that can be drawn between the gender roles and expectations from one book to the other.
But, the most striking relationship between these two texts are the diabolical head nurses in each story.  Reading these two books, I think that I'd expect to meet a devilish, power-hungry, just-plain-crazy nurse. In One Flew Over the Cuckoo's Nest, the infamous head nurse is named Nurse Ratched. She's pure evil. In Wildthorn, she's called Weeks.  Weeks is not quite as horrific as Nurse Ratched, but she's no one to mess with. She makes it clear to Louisa that she controls the institution and Louisa quickly understands that Weeks is not someone to mess with.
* * *
Overall, I enjoyed Wildthorn tremendously. I think that it could easily be used in a classroom, particularly in a Women's Studies or Women's Lit course. We have an English elective course at our school called Women in Society. I just might suggest this title to my colleague who teaches it!
And, thanks again to the Book It Forward ARC Tours site!
Posted by Mrs. DeRaps