Book Review: Before I Fall by Lauren Oliver 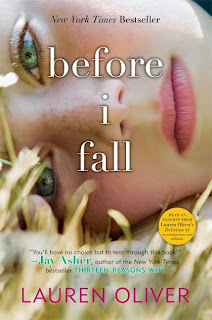 At the outset of the story, Sam is a classic "mean girl." She and her posse of friends rule their school and everyone in it. In fact, she's more than a mean girl. She's a narcissistic bi-atch who only cares about her superficial popularity, which is based almost entirely on putting others down.

I think that it takes great courage on the part of the author to create such a repulsive personality for a main character. I mean, Sam is not an admirable character at all. In fact, she's the antithesis of good. She's snarky and rude and obnoxious. I hated her.

But, I was supposed to hate her. Lauren Oliver, the master author of this debut novel, wrote one of the most vile main characters in all of YA lit, and then made me love that same character over the course of 470 pages. That's talent.

Because even though you might hate Sam, you want her to make her life right. She has the opportunity (which seems like a curse for the most part) to relive her last day and make changes to her behavior along the way. This book has been compared to the movie Groundhog Day quite a bit, but it actually reminded me more of the old TV series Quantum Leap.

In that show, the main character travels though time into other people's lives (so it's not the exact same), and cannot leave their life until he's figured out a way to fix the problem that he's been sent to remedy. Before I Fall is like this. Sam will not stop reliving her last day until she figures out why she's being sent back and fixes the way that her last day ended.

I loved this book. It felt original and fresh and the writing was dynamic. Sam's life and the way that she transformed her personality in this story made me think about my own relationships and the way that I treat others. But, I didn't feel like the author was breathing down my neck from some moral high horse, either. I came to my thoughts and realizations on my own, just as Samantha did in this story. An excellent novel.
Posted by Mrs. DeRaps