Lately, I've been reading a lot of dystopian novels. The pair of books that I am going to talk about in this post both fit this genre. Usually, when I'm reading a YA novel, I find plots and characters that make me think of classic texts that I've read. In the English teacher world, pairing a classic with a YA novel for students would be called "bridging". Using a YA text to help students move from a modern, often simpler text to a classic can be an effective method of teaching. I use this all the time in my classroom. The purpose of this feature is to highlight some pairs that I see as useful in the classroom setting. 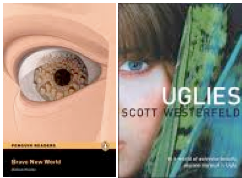 This pair happened a little backwards for me. I had already read Scott Westerfield's The Uglies (first in a series of dystopic novels) and enjoyed it very much. Then, a mentee of mine took a job in a new school district. Being the nerd that I am, I agreed to read all of the books that she was going to teach at her new placement and help her (if I could) brainstorm teaching ideas. This is why I read Aldous Huxley's Brave New World.

I think that there are probably other books that could pair with either of these titles. This is the beauty of bridging; it is in the eye of the reader. In my mind, these two texts are connected in several ways. Here's a short list of the connections I see. In both texts:

-Children are separated from their parents before a bond can form
-Drugs are used in each to keep teens and adults sedated
-Sedation is used by the government to control
-There is a huge focus on material goods, creating a superficial want & need ideal
-Sexual promiscuity is encouraged
-Technology is advanced and is used to control the masses
-There exists an "otherworld" full of rebels and outcasts (the "savages" in Brave New World and the "rusties" in The Uglies)

I like there is a male lead in the classic and a female one in the YA novel. I think that there are a lot of additional choices made on the part of the author because of the differences in gender. There is a huge amount of room from both texts to talk and think about gender roles, hierarchies, government controls, censorship, and materialism in our modern society.

Lastly, I've already received one reader's suggestion for a future Book to Book feature. I am delighted! I do, though, have to confess that I have not read Charlotte Bronte's Jane Eyre, which is the classic that this reader suggested I pair with Jerry Spinelli's Stargirl. I am super familiar with Stargirl, and from what I know about Jane Eyre, this sounds like a great connection. I plan to read Jane Eyre this summer and will hopefully profile it on this blog in the fall.

I welcome other suggestions for future Book to Book posts. Let me know what you think!
Posted by Mrs. DeRaps