Book to Movie: The Girl With the Dragon Tattoo

The Girl With the Dragon Tattoo by Stieg Larsson is not exactly a YA novel, but it is an adult read that could cross over to some teen readers and YA lit lovers. It's a super gritty read and has some serious adult themes, but it is oh-so-good.

So, I'm going to review it here. Though I try to keep this blog filled with YA reads, this movie and this book are so powerful that I wanted to share them. And, I think that a lot of people have either read this novel or are going to see the movie.

As many of you probably already know, the author of this book died shortly after turning in the three manuscripts for this series. All of the books in this series were published posthumuously in 2006. Larsson died of a heart attack in 2004. I guess that this fact made me want to read the novels more because I knew that this is it. The author is dead, so there will be no cheesy extensions of his characters and his work will not get "soft" after receiving all sorts of cash and praise. 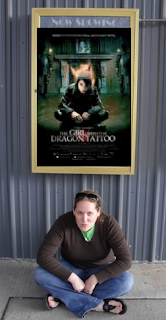 Back to the book and the movie. Basically, the plot of this book is that there is a huge conspiracy among a hugely rich family called the Vangers. You should know that the original title of this novel was "Men Who Hate Women", which actually sums up the book quite nicely. Despite the fact that there is a ton of information, including a complete family history of the Vangers, this is a gripping and suspenseful read. Plus, I totally enjoyed learning about Swedish culture, which is very different than American culture and extremely different from the way that I pictured it. (My picture was based on just about nothing; maybe an Oprah show and Swedish Fish. Not much, indeed!)

The movie differs fairly significantly from the book in lots of small details and a few major plot points, but it was fairly well adapted to the screen. I'm sure that making a film script from a novel is challenging and I like to give script writers a lot of room for interpretation, especially when the author of the original text is no longer with us.

This movie was not playing at our local theater, so I had a round-trip drive of about three hours to see it. It was totally worth the time and the gas money. It was hard to watch and I don't recommend that everyone see it--Some parts were extremely violent and disturbing. But, if you loved this novel, I don't think that you'll be disappointed in the movie version. Let me know if you are and we can debate or something.

Please note me trying to look like the title character. I don't pull off angst very well!
Posted by Mrs. DeRaps